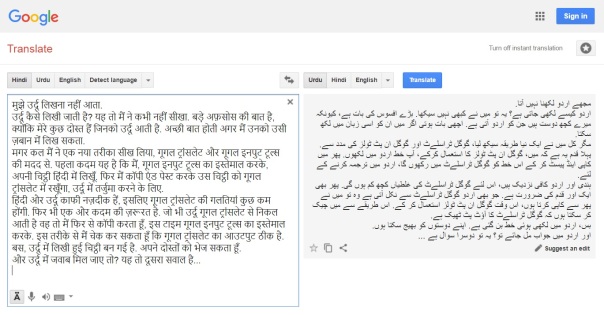 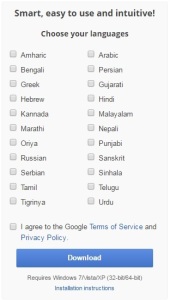 I had some fun on Facebook last week, posting a link to a Google Translate page – not because I was at all interested in the machine translation, but because with some languages, including both English and Hindi, an additional “Text To Speech” (TTS) facility is thrown in. It’s this synthesized speech function I was wanting to highlight. I’m not sure all my friends got that point, so I’m posting again, but this time with a bit more explanation and a screenshot thrown in. (This is where WordPress wins over Facebook hands down!)

So here goes. If you’re interested in Gaelic “TTS” follow this link to get my own “off the shelf” take on it. Never mind the proffered translation on the right hand side of the page. That’s irrelevant to my purpose. Just click on the “Listen” speaker icon (circled in red in the picture above) in the left hand box containing the “Hindi” script.

Ho hum, if only our Gaelic-speaking forefathers had chosen to write in Devanagari instead of the Roman alphabet, how much further forward might we now be!? Actually, you can do the same sort of trick with “English” TTS. Follow this link – which, if nothing else (if you can bear to listen), demonstrates the phonetic distance that your “average” English English speaker has to travel in order to get anywhere close to the Gaelic sound system…

A bit of fun, as I said. But I’m tempted to extract a linguistic moral, nonetheless. Language and writing are not one and the same thing. Speech can be effectively represented on the page or screen in many different ways. When we privilege one system over another, perhaps in a search for standardisation or normalisation, we may be prone to accord an exaggerated importance to orthographic orthodoxy, at the cost of undervaluing oral ability. Yet speech comes to us first. It is the real deal, writing a mere representation.

Man met Machine Translation (as well as, though not to be confused with, Machine Transliteration) the other day. A Facebook-facilitated re-encounter with one of my Hindi teachers from nearly thirty years ago finally prompted me to figure out how to write in proper Hindi script (Devanagari) on the computer. I figured it had to be doable in this day and age, and so it soon proved as the previous post shows, using Google IME, an easy to use transliteration system. You type in the Hindi word as you would “write” it using the Latin alphabet, and the program figures out the proper Hindi spelling in Devanagari. Magic.

Suitably impressed and enthused I started writing – Word, e-mail, WordPress, and then Facebook. Here’s the FB string. (Click on the image to enlarge.)

The responses have been interesting. Isobel starts in English in complimentary fashion, but switches to Gaelic to ask what it is. Michael replies to identify the language, and then goes on to explain, very accurately, what I’ve just been writing. I happen to know he’s multilingual, but hadn’t figured on Hindi being on his language list. Then Bill and Isobel write back to me – in Hindi! (OK, the grammar’s not perfect, but the message is clear if contradictory – one inviting me to stop, while the other asks why…) Anyway, I’m impressed, and say so, whereupon my neighbour Nick breaks in with his own somewhat bookish and Sanskritic expression of wonderment, and asks, in Hindi, how it’s all done. Things eventually go quiet when I invite him round to the house so that we can continue our conversation – in Hindi… A surreal exchange, but great fun.

So what kind of language behaviour is it when the writer “writes” something without the aid of any human third party intervention that they can neither read nor say? And what motivates them to do it, anyway? There’s probably a PhD thesis in there for someone, but I think fun has got to have something to do with it – that and some kind of sense of adventure, a willingness to try out something new (I suspect Google Translate in this case, unless my friends have been keeping a secret from me) just because you know you can.